Prostaglandin E2 (PGE2) synthesis modulates the response to radiation injury in the mouse intestinal epithelium through effects on crypt survival and apoptosis; however, the downstream signaling events have not been elucidated. WT mice receiving 16,16-dimethyl PGE2 (dmPGE2) had fewer apoptotic cells per crypt than untreated mice. Apoptosis in Bax–/– mice receiving 12 Gy was approximately 50% less than in WT mice, and the ability of dmPGE2 to attenuate apoptosis was lost in Bax–/– mice. Positional analysis revealed that apoptosis in the Bax–/– mice was diminished only in the bax-expressing cells of the lower crypts and that in WT mice, dmPGE2 decreased apoptosis only in the bax-expressing cells. The HCT-116 intestinal cell line and Bax–/– HCT-116 recapitulated the apoptotic response of the mouse small intestine with regard to irradiation and dmPGE2. Irradiation of HCT-116 cells resulted in phosphorylation of AKT that was enhanced by dmPGE2 through transactivation of the EGFR. Inhibition of AKT phosphorylation prevented the reduction of apoptosis by dmPGE2 following radiation. Transfection of HCT-116 cells with a constitutively active AKT reduced apoptosis in irradiated cells to the same extent as in nontransfected cells treated with dmPGE2. Treatment with dmPGE2 did not alter bax or bcl-x expression but suppressed bax translocation to the mitochondrial membrane. Our in vivo studies indicate that there are bax-dependent and bax-independent radiation-induced apoptosis in the intestine but that only the bax-dependent apoptosis is reduced by dmPGE2. The in vitro studies indicate that dmPGE2, most likely by signaling through the E prostaglandin receptor EP2, reduces radiation-induced apoptosis through transactivation of the EGFR and enhanced activation of AKT and that this results in reduced bax translocation to the mitochondria. 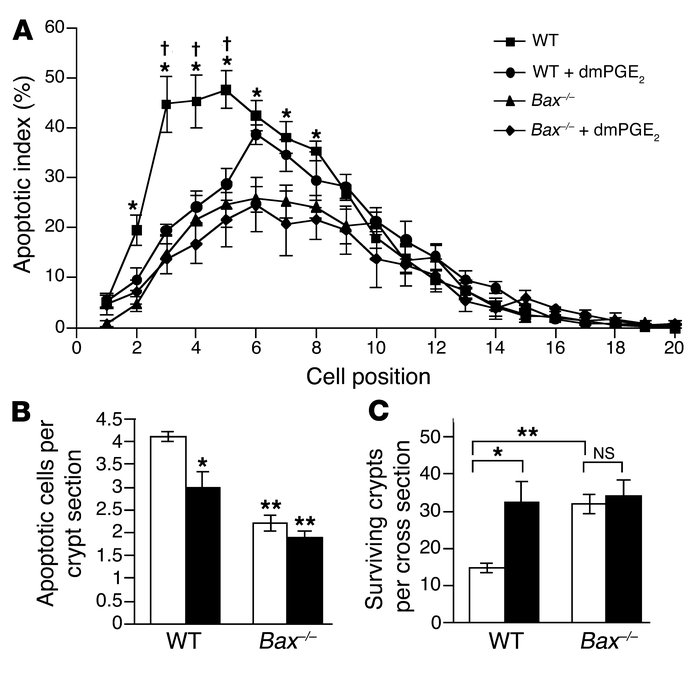