Hepatic glycogen can regulate hypoglycemic counterregulation via a liver-brain axis

Hepatic glycogen can regulate hypoglycemic counterregulation via a liver-brain axis

Schematic representation of the study. 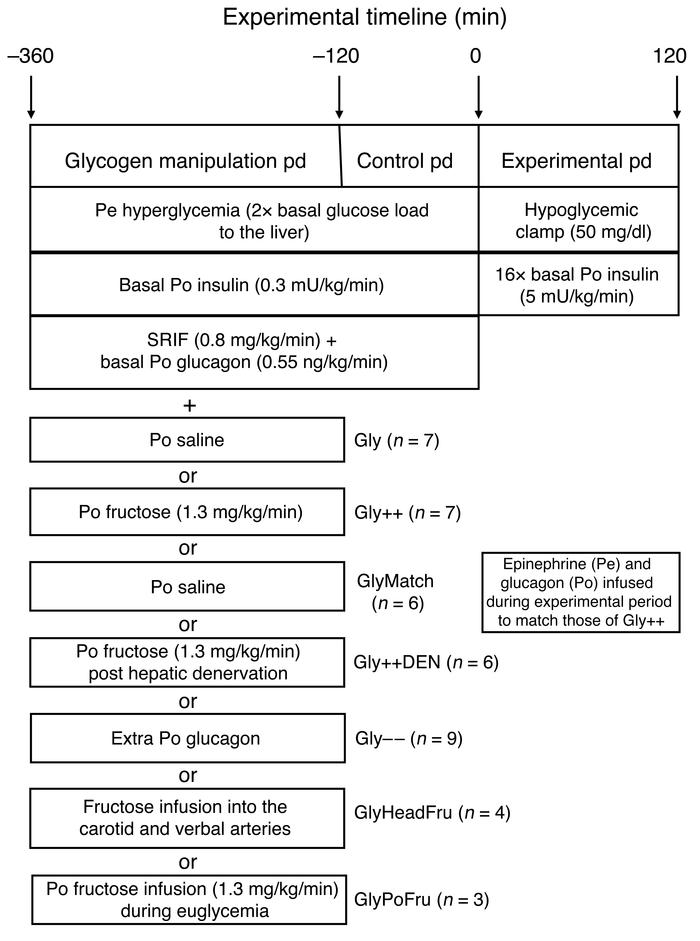 During the glycogen-manipulation period, most (see explanation below) animals underwent a hyperglycemic-pancreatic clamp where both insulin and glucagon were replaced at basal levels with an intraportal (Po) infusion of the hormones and glucose was clamped using a peripheral (Pe) infusion of dextrose. One group received an intraportal infusion of saline (Gly), and a second group received an intraportal infusion of fructose to increase liver glycogen content (Gly++). The glycogen-loading period (pd) was followed by a 2-hour control period where the respective infusions of either saline or fructose were discontinued and then a 2-hour hypoglycemic/hyperinsulinemic experimental period during which counterregulatory responses were assessed. The GlyMatch group did not have increased liver glycogen content, but glucagon and epinephrine were infused during the hypoglycemic period to match those seen in the Gly++ group. The role of hepatic afferent nerves in the increased counterregulatory hormone levels seen as a result of increased liver glycogen content was assessed in the Gly++DEN group. To determine the effect of a decrease in liver glycogen on hypoglycemic counterregulation, another group of animals received a variable intraportal glucagon infusion during the glycogen-manipulation period (Gly– –). Finally, to determine the role of fructose per se on the responses to insulin-induced hypoglycemia, the sugar was infused into either the carotid and vertebral arteries of the head (GlyHeadFru), or it was infused intraportally under euglycemic conditions (GlyPoFru).